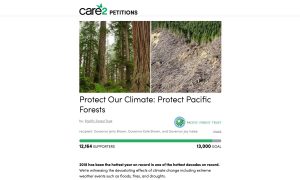 In September 2018, Pacific Forest Trust embarked on a paid acquisition of activist names, addresses, and email addresses. PFT chose to work with Care2.com, which runs thepetitionsite.com, because of their ability to target activists by state, their large list of subscribers who were described as likely to donate after being cultivated, and the relative ease of launching a campaign.

The petition worked quite well. PFT’s target was to acquire 10,000 new activists in Washington, Oregon, and California, who would sign the petition to their governor and then actively opt in to receiving email. Care2 delivered the targeted number of emails (including address data) in just over one week. Those subscribers made it possible for PFT to generate meaningful numbers of emails to state- and federal-level elected officials and other targets for the first time.

I managed and executed this project with minor editorial oversight from PFT’s President and with input from Care2.com’s campaigners. Here’s the petition copy:

2018 has been the hottest year on record in one of the hottest decades on record. We’re witnessing the devastating effects of climate change including extreme weather events such as floods, fires, and droughts.

Our climate is rapidly changing due to the buildup of heat-trapping gases, especially carbon dioxide, in our atmosphere. But, did you know that the loss and degradation of our forests is one of the biggest reasons why – second only to fossil fuel emissions?

The U.S. is losing an average of 1.5 million forested acres per year. The good news is that, unlike vehicles, forests can reabsorb carbon emissions – when protected, forests are the safest, largest, and most expandable carbon sink in the world. Our temperate forests of the Pacific Coast provide a cost-effective climate solution while also providing rich wildlife habitat, clean water, and sustainable economic benefits.

However, without immediate action, the benefits provided by these forests will disappear and be replaced by increased levels of atmospheric CO2 and a greater chance of catastrophic weather events.

We can’t solve the climate crisis without our forests. That’s why we are calling on the governors of California, Oregon, and Washington to immediately implement policies that reduce forest loss, restore forests’ natural functions, and reforest former forests, in order to reduce CO2.

Sign and tell your governor to take immediate action for our forests and climate by implementing policies to protect and preserve Pacific forests.

Read the original petition, which is now inactive, at https://www.thepetitionsite.com/takeaction/567/230/041/; a version of it was live on PFT’s Action Network installation as of January 2020 at https://actionnetwork.org/letters/pft-protect-our-climate-by-protecting-forests.