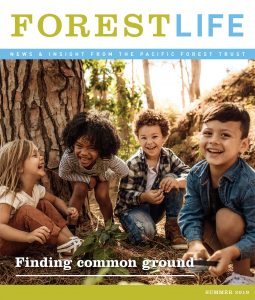 In the summer of 2019, I put together my second issue of Pacific Forest Trust’s newsletter, ForestLife. The newsletter is published both in print and online.

As Communications Manager at PFT, I served as the newsletter’s managing editor, with tasks that include: coordinating content and other editorial decisions with senior staff; creating an outline, story assignments, and a thumbnail mockup; sourcing vendors; selecting photos; conducting interviews and securing quotes; and writing and editing content, including the final copy edit. The President/Co-CEO maintains a large amount of editorial oversight; she also contributes content, as do other staff.

Among the improvements I made to this issue was moving the image-based table of contents from the inside front cover to the back cover, in order to give recipients more reasons to open the booklet. I also chose a new vendor, GreenerPrinter, and was very happy with the results: a noticeably crisper publication for a lower price (and mailed from their facility as well, helping streamline the process for me). I was happy to receive feedback from the printer that they were pleased with my final output file, which went through their pre-press process without any errors or warnings, a testament to my attention to detail.

Here’s a sample article from the Summer 2019 issue:

The health of our forested watersheds is crucial to water security. The effects of climate change, where drought alternates with intense precipitation and flooding, only reinforce that vital role. Compared to degraded watersheds, healthy watersheds collect and retain more water, hold water longer into the summer, and reduce flood risk. That is why PFT’s Healthy Watersheds California program is advancing the comprehensive restoration and conservation of the state’s primary source watersheds as essential components of its water system infrastructure.

PFT is also focused on understanding the effects of climate change on the habitat and species specific to this region, which is a major climate refugium and considered to be the most important for wildlife adaptation statewide. With climate change accelerating, many species of wildlife are likely to move into this region; current modeling predicts it will retain more of its habitats than other regions of the state as it remains generally cooler and wetter.

PFT recently received a $400,000 grant from the California Wildlife Conservation Board to build a state-of-the-art model of the effects of climate change on the region and identify where habitats are likely to persist in a changing world. Working with Dr. Dean Urban of Duke University (and PFT’s Board of Directors) and Dr. Jim Thorne of the University of California-Davis, this effort builds on our 2017 Risk Assessment of California’s Key Source Watershed Infrastructure. Integrating Dr. Thorne’s modeling of climate risk, wildlife species range shifts, and wildfire risk, and applying Dr. Urban’s multi-criteria spatial prioritization methodologies for conservation actions, this project will help identify “best bets” for habitat and species conservation and restoration work, as identified under AB 2480. The new model will combine climate risk maps, species range models, connectivity, and climate vulnerability rankings to develop landscape-scale maps that show the relative risks and resilience within each of the five watersheds, which will inform critical planning activities in the years to come.

Additionally, the Healthy Watersheds Consortium, funded by the U.S. EPA, the USDA’s Natural Resources Conservation Service (NRCS), and the U.S. Endowment for Forestry and Communities, renewed its support for the HWC project. Our partnership with the Consortium has added significantly to the national and regional conversation on water infrastructure development and climate adaptation, and it will continue to transform how California defines and manages its critical natural water infrastructure.

PFT has worked in this region for more than 25 years due to its extraordinary forest, wildlife and water resources. (Find out more in our report California’s Watershed in the Balance at pacificforest.org/kc). Our 2017 Risk Assessment documented that this highly diverse and water-rich region is degraded, with
significant impairment to its habitat and watershed functions. The region faces major and imminent risks of fragmentation, habitat simplification and loss, and fire—four of the five 2018 megafires occurred here. Advancing climate change exacerbates these risks, as vividly demonstrated by those fires and by the 2016 flood of the Feather River with concomitant failure of the Oroville Dam spillway. At the same time, climate and habitat response analyses by Dr. Thorne and others’ research on how wildlife utilize the region indicated that it is likely essential for many species’ future survival.

Making actionable steps out of these results and other policies and analyses requires broad collaboration and partnerships. We are pleased to be part of the Sierra Meadows Partnership and are increasing our work to engage local communities, landowners, and regional, state, and federal agencies. We welcomed Jill Harris as our new Project Manager for Outreach and Communications for the Healthy Watersheds California program to help with this. Jill has been working in the Mt. Shasta community for many years in a variety of relevant fields, from community economic development to community foundations and water. Jill and the rest of PFT’s team look forward to continuing to put these important ideas into action.